Sociometry is a methodology for stimulating, exploring and measuring interpersonal relations invented by J L Moreno (1889-1974). The purpose of sociometry is to facilitate group task effectiveness and satisfaction of participants by bringing about greater degrees of mutuality amongst people and greater authenticity in relationships. Moreno noticed groups and communities function with people being attracted to or draw away from others and the subsequent networks and patterns of interaction these created. He discovered when people chose whom they interacted with, the higher level of satisfaction in being together, sense of belonging, achieving their purpose.

Moreno’s early long-term study within the Hudson School for girls in New profound results. Frequent runaways had those at the home look for innovative solutions. Moreno was invited to work with the girls and staff. He set about and invited each girl to choose who she would prefer to sit at meals with. Their choices were mapped and enacted. The level of runaways dramatically reduced.

Sociometric methods have been developed over time, with the principle that the investigator is an active group member. Material generated from the group belongs to the group members. Is not taken away by the researcher and managers to make decisions about the group. Sociometric interventions bring flexibility to systems and groups by investigating the choices with the people who make them and displaying the patterns of relationships created by those choices. Stimulated by this information, group members create new patterns for themselves and enhance authentic companionship and greater mutuality in the group.

All groups have intricate networks, based on both moment-by-moment socio-emotional choices, and longer-term psychosocial networks, which endure over time. Identifiable patterns of interactions become apparent. These networks reflect alliances, hidden agendas, subsystems, subgroups and isolates gathering around identifiable individuals, and their values, beliefs, and experiences. Some liaisons become entrenched and others are enacted moment by moment. In order to understand what makes a group tick, an assessment of the strengths and qualities of relationships in the group is essential. People are curious to know where they stand in relations to others; within their family, with friends, with their bosses, peers and colleagues, and are curious about others’ relationships. Who is close to their mother, their manager, who doesn’t get on with who.  Who will be chosen for project teams and on what basis? Who do you go to, to know what is really going on here?

Sociometry means ‘companion measure’. Moreno designed it as a measure, a new science. He wanted to create a society where all humans achieve their potential to love, to share and face their truth. By making choices overt and active, he hoped individuals would be more spontaneous, authentic and and group structures would become fresh clear and lively.

By making choices based on criteria, overt and energetic, individuals become more spontaneous, and organisations and groups structures become fresh, clear and lively. 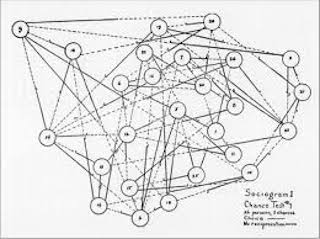